There is a silent leadership crisis going on right now in many workplaces around the world. The generation shift taking place in the market and the changing needs of the current workplace, including software development teams moving to Agile and its model of “servant leadership,” are forcing an older generation of leaders to evolve their leadership styles.

This article explores this leadership crisis from different angles and attempts to point toward areas where leaders can observe their own behaviors and consider new possibilities.

In many companies, the word “leadership” is associated with people who are strong, directive, and who get things done. The culture in these companies promotes people who act in this way to get results.

When you look more closely at the leadership teams that work in these cultures and hear their stories, you will come to realize they are part of a cycle that perpetuates itself. For example, a long-time department head learned this behavior from his boss as he was coming up in the company (and may still be acting this way with him now) and figured this was the way things work here. Because this behavior is “normal” to him, he works with his own management team in the same way and teaches them the same behaviors.

Although there can be something very comforting about having such strong and directive leadership figures, it can also create the daunting side effect that employees become unwilling to take any initiative for fear of being shut down, ridiculed, or blamed for failure.

As a consultant, I often begin my engagements by doing some form of an assessment for my clients of what is going on in their organizations. During this phase of the engagement process, there is often a delicious polarity that comes to light.

The leadership team will bemoan the fact that many employees seem to be going through the motions, seem disengaged, or seem not to be taking any initiative. Meanwhile, employees will tell me all about the lack of openness, directivity, and control that management exerts over them. It is not that they do not want to try, but indirectly they are being conditioned not to try anymore.

When I report back to the management team, they process the information and then it cycles back to how they have to act in this way because of the lack of engagement and initiative on the part of employees; a perception that in turn perpetuates the cycle and the current culture.

There is an entire male generation in the world right now who grew up in an era when “real men” did not show their emotions or reveal their vulnerability in any way. Many men in the older generation of leaders right now are cut from this mold.

One challenge this generation of men now face is that there is an increasing number of women assuming prominent leadership roles. In the not-so-distant past, these women were a small minority and they had to adapt to the mostly masculine culture around them, but this is no longer true. In recent conversations with these male leaders, many understand there is a need for them to change as well, but they do not know how to make this change, and it creates a lot of discomfort for them.

In my work, I see and hear many leaders who make judgments on the emotional outbursts of their employees without recognizing how their words in a certain situation or their actions (or lack thereof) in the past or present contributed to the outburst.

In many companies, you can read the company values on the company intranet, but how are the leaders actually living and breathing these values every day when interacting with their employees?

In companies trying to adopt Agile practices, new values need to emerge. Among other things, leaders of Agile teams need to be able to empower their teams and trust them to make decisions. This is one of the key success factors in building high-performing teams.

I often remind many of my clients that being Agile is not about what you think you are doing or what you would like to do; it is about how you actually embody the values through your everyday actions with your employees and business partners. For example, if you say one of your values is to empower your employees, how does this actually play out in your interactions with them every day?

Real change begins with leaders living and breathing the values they say they are promoting!

Let’s take a quick look at how this could unfold. Imagine for a moment a team composed of people who have worked in a company for a very long time. During this time, leaders conditioned their employees to follow directions — do as they were told, or else.

Now imagine this same team hearing about your value of empowering employees. Consider how they feel when the same leaders who behaved otherwise for all those years tell them they can start making decisions about their projects. The hard truth is that on both sides, this feels very unnatural at first and, based on my experience, a few things tend to happen: 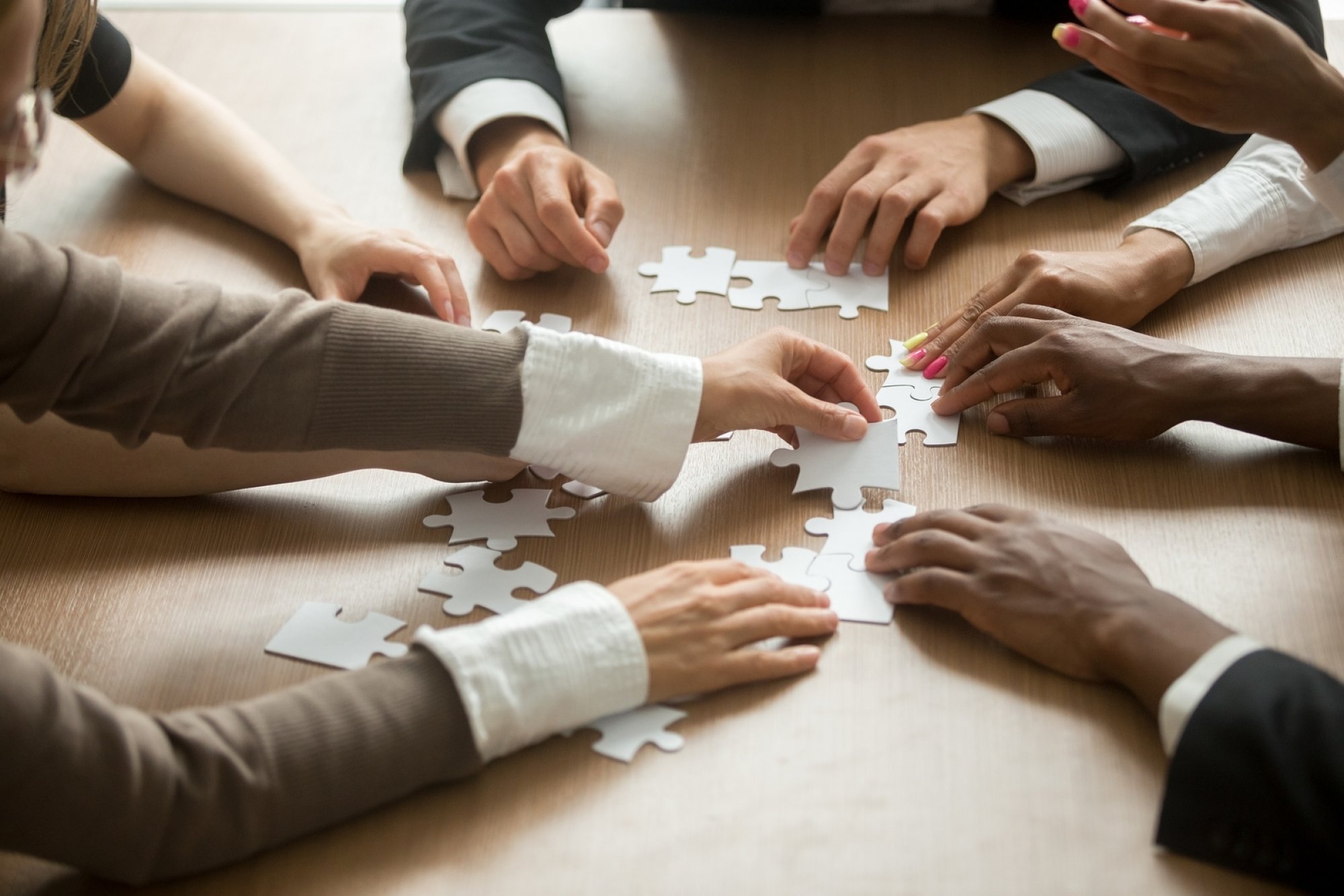 The art of co-creation

In some companies, leaders may have a hard time participating in conversations because of how they feel they are influencing the conversation. When they speak, people will tend to go along with them, so they find themselves speaking last to allow everyone else to speak; ironically, this also gives them the last word.

A similar situation I see in some cultures is teams that refuse to make decisions and systematically turn to their leaders to be told what to do. The paradox is that when this happens, as I mentioned earlier, it is often because the leaders conditioned their employees to act in this way. In a world where these leaders are now attempting to empower their teams, this becomes frustrating because leaders feel stuck between the proverbial rock and a hard place. They may wonder whether it is better for them to take over the situation or to walk out of the room and let the team fend for itself.

The challenge for leaders in these situations is learning how to engage actively in conversations just like any other participant in the room. The solution lies in finding the right balance between supporting the team to have the right conversations and pressing your own view because the conversation is messy. Although the conversation may seem disordered and painful to you as a leader, teams need to learn to get through this phase to become more productive and take more ownership in their decisions.

How can you suggest an idea and at the same time allow others to change or reject it? How can you bring your points into the conversation in a way that supports the team and leaves them space to continue the discussion?

With Agile teams, we speak of “servant” or “collaborative” leadership, but leaders often misunderstand this concept. In my experience working in large companies, I have seen leaders shy away from influencing a team decision or speaking their piece because their belief is that leaders need to step away to let the team decide.

I often tell new Agile teams they should start by making decisions around things over which they have full control. As they make decisions and resolve problems in the areas they can control, they are also building their credibility. When they go to their leaders for help, the leaders feel more compelled to help because of the team’s track record.

Up to this point, I have intentionally used the terms “leader” and “leadership team” when I just as well could have replaced them with “manager” or “management team.” The real question is whether or not there is a difference between these terms.

The answer depends a lot on the company culture. When roles and hierarchies matter a great deal in the company, there probably is no difference between the terms, and this creates environments with many dormant leaders. These dormant leaders have a lot of leadership ability but they are not in a hierarchical position where they can use this ability, so they hold back because of past experiences in which they were shut down when they tried to bring their leadership to light.

In this era of tight headcounts, companies that can harness the power of all the leaders in the organization, hierarchical or not, have a tremendous competitive advantage in the market. Leaders create leaders around them, and this means that hierarchical leaders need to recognize that the leadership of others is not necessarily a threat to their own.

In this era of tight headcounts, companies that can harness the power of all the leaders in the organization have a tremendous competitive advantage in the market!

The new generation is looking for life-work balance as well as inspiring leaders who will fire them up and motivate them. In the new workplace, company values actually need to mean something. People need to see their leaders living and breathing these values every day.

The command-and-control leadership style that was effective in the past is no longer as effective for leaders looking to build high-performing Agile teams with engaged, motivated, and empowered employees. An Agile transformation means that leaders need to change, and the company culture may need to change as well. Cultural transformation takes time to truly integrate itself fully in the day-to-day working environment.

Leaders in companies with a culture of control need to recognize when the impact of the past is showing up in the present and is hindering their current efforts for change. Leaders who can recognize and acknowledge this impact while showing an alignment between their words, their actions, and their intention and desire for change will get traction for change much faster.

Learning to become a servant leader for your Agile team means finding ways to create the space that empowers and harnesses the collective knowledge and skills of everyone on the team. Becoming a servant leader also means accepting that leadership of others is not a threat to your own personal leadership.

Resolving the leadership crisis also demands that leaders have the courage to show up with authenticity and vulnerability. This creates a big challenge for an older generation of leaders accustomed to a more hierarchical style. But in a competitive landscape that is moving so quickly in the world, can companies truly afford not to do anything to resolve it?

I am a leadership development coach, corporate trainer, professional speaker and author. I believe in contributing to a greater cause, making a difference and adding value.