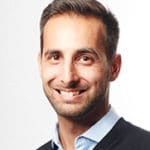 Pedram Malek’s family immigrated to Canada when he was still young. He grew up just outside of Toronto where, in high school, he discovered programming.

Is his computer studies classes, Pedram began coding complex games in small groups with his classmates.

“One of my most memorable projects was building the game Monopoly with graphics,” he says.

Those early experiences led to a computer sciences degree from Ryerson University. But he attributes his own work ethic to his father, a small business owner.

“I learned what it meant to be an employee with responsibilities, and later how to manage the many moving parts of a company to deliver services to customers,” Pedram says. “My dad’s entrepreneurship would later spurn me to start my own consulting business and co-found two startups.”

Pedram first experienced Agile without even knowing it, in one of his first early software development jobs. He was part of a team of mechanical, electrical, and software engineers building a machine that manufactured solar panels for a Fortune 100 client.

“My primary role was to develop all of the software components including the user interface, databases, and hardware controllers that operated the motors, sensors and lasers,” Pedram explains. “We built the machine and integrated our parts in small increments, showing the results to our customer at the end of each iteration until they wanted us to ship the machine for production.”

It turns out Pedram and his team were doing something called Scrum. And it worked. It was first time in the company’s history that it delivered software without any bugs.

His curiosity for Agile principles deepened through Scrum training with BERTEIG. Pedram eventually joined the company as an Agile trainer himself.

When looking back, Pedram Malek says there were early signs that he would become a trainer. His high school teachers suggested he attend teacher’s college after seeing his eagerness to help his classmates. At university, he would tutor and mentor his fellow students. And he’s spent many years volunteering with community youth groups.

“It all helped me hone my capabilities to help individuals and teams discover ways to improve their own ways of working in their own unique environments,” Pedram says.

Since joining BERTEIG, he has worked with several high profile clients including General Electric, CIBC, Scotiabank, National Bank and Trader. Pedram describes one experience with a client that was suffering from never-ending defects while trying to replace a legacy system with a new platform. The delays were costing the company hundreds of thousands of dollars per day and impacting thousands of customers.

After assessing the situation, Pedram coached the teams by instructing them to do a big mob programming session.

“One person would type on a machine connected to a projector and everyone else would watch, learn and contribute ideas until they were able to write three end-to-end tests,” Pedram explains. “It took two dozen developers two full days and lots of delivered food to discover and write those automated tests.”

The results were dramatic. The bottleneck in the team’s quality assurance was virtually eliminated. Lead times improved and the defect rate decreased by 600% within a few months.

Pedram Malek also has a rare talent for dexterity.

“I’m multi-handed,” he explains. “I use my left hand to write but use my right hand to throw.”

Pedram is a valued member of the BERTEIG Team.

Pedram Malek holds a BSc. in Computer Sciences and has been developing software for over 13 years in a variety of industries and applying Agile principles. He joined BERTEIG to help train and coach teams and leaders to create productive and creative environments while focusing on customer needs.

Pedram also leads the development of BERTEIG’s core technology that supports our vision and strategy.